Oh the ding ding. My most favouritest form of transport in Hong Kong. One of the oldest and quaintest ways to get from the east to the west of the island — though it would take a while. First opened in 1904, the electric street tram is affectionately known by the locals as the ‘ding ding’ due to the little bell that rings to warn people that it is coming down the road. But death by ding ding would be impossible, as it goes so slowly that you could, literally, outrun the tram (I’ve done it before trying to catch up with it). It may not be the fastest or most efficient way to get around, but to me it is one of those quintessential Hong Kong experiences, like riding the Star Ferry. And no matter how big and modern Hong Kong gets, no matter what kind of mega skyscrapers climb up through the clouds, no matter how many new high-speed train lines keep opening up, the humble ding ding just keeps on going, silently, down the street. 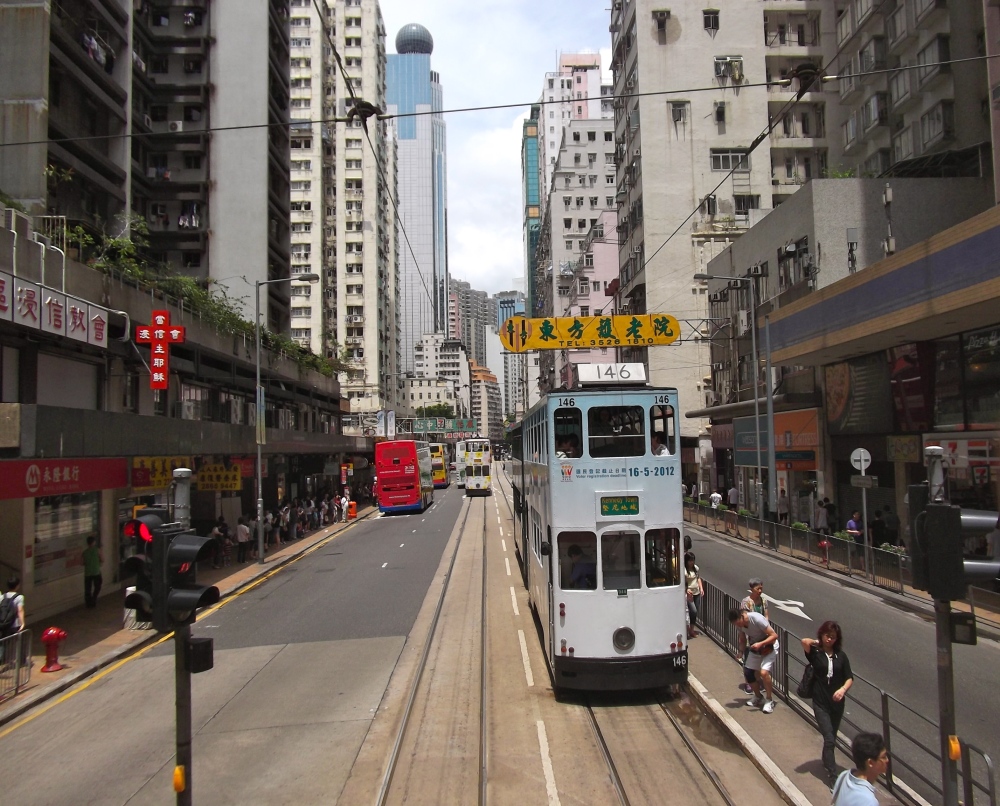 This might sound stupid, but one of the big draws for living in this apartment is that we are a stone’s throw from one of the ding ding terminals, which means I have the pleasure of taking the ding ding to work every day. It’s not a long ride, but I truly enjoy getting on the ding ding early in the morning, taking a seat on the second floor, and just watching the world go by. I feel like a tourist every day, and it’s a great way to mako.

My ride winds its way through the historic ‘Dried Seafood District’, where the traditional Chinese products still dominate. There are no air-conditioned superstores here, just small family-run seafood stores selling everything from dried shark fins, abalones, scallops, oysters, mussels, seahorses, fish stomach, sea cucumbers, seaweed, salted fish, sun-dried fish, fish sausage, pickles, and so on. Early in the mornings, before it gets too hot, the shops are already open and people are shopping.  And you don’t just see it, you smell it too, even from the ding ding!

People rarely ride the ding ding for long distances and it would just take too long, so people generally use it to get around the downtown area, hopping on and hopping off short distances. There tend to be a lot of old people on the tram because it is extremely cheap — HK $2.30 for adults and just HK $1 for seniors. As you can imagine, a LOT of seniors take advantage of this practically free ride.

When in Hong Kong, riding the tram is considered a must-do. Lucky for me, I get to do it every day!