It’s late October, which means only one thing — hiking season!

It’s ridiculous… most people lose weight during the summer and gain it during the winter, but in Hong Kong it works in reserve. People spend the summer months hiding indoors from the insane humidity which leaves you drenched with sweat, and as a result people do very little during the hot summer months. However, the fall is perfect for hiking. It’s bright and sunny, and the change in temperature makes the difference between heat stroke, and enjoying a nice day on the mountains.

Three lovely ladies who live close by, Colleen, Marleen and Heidi, called me up and asked me to lead them on a hike that I’d been telling them about, up Lo Fu Tau, the Tiger’s Head. It’s one of my favourite hikes, because for some reason the Hong Kong government insists of paving sections of popular hiking trails to make it ‘more accessible’ to the general public. But this hike is pure earth, no concrete at all. Just lots of rocks, and an ancient trail cleared by hundreds of years of footsteps. 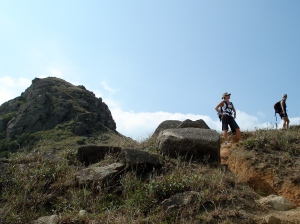 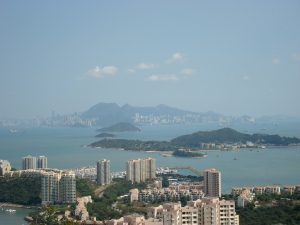 It was one of those rare days when you can see all of Hong Kong. In the picture above, you have a perfect view of Hong Kong island in the foreground, where you can see all the skyscrapers of Central, as well as the posh south side of the island where all the millionaires live. 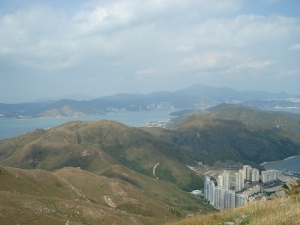 After the hike, we were sufficiently sweaty, and decided to do a little trespassing and jump in some rock pools that I had discovered. The water was a bit cold — after all, it is almost November — but it was a welcome respite from the blazing sun. 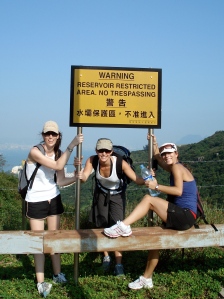 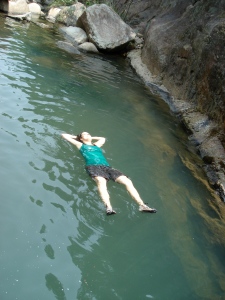 Life is hard when you’re so positively buoyant!!!