There are flying fish all over Okinawa these days. And I don’t mean jumping out the water.

A national holiday called Children’s Day is just a few days away, and koinobori – carp windsocks – have been strung up across bridges, in people’s gardens, rooftops and balconies, and even in the schools. It’s a popular sight in Japan as the carp are bright and colourful, and you can buy them from the local dollar store, if that is all your budget allows (thanks, China).

Yesterday I took some people from my Japanese school on a day trip to see a koinobori event at the Okinawa Peace Park, on the south coast of the island. And boy were we lucky! I had read that 20,000 koinobori had been strung around the park, and that one of them was 100 feet long. And as we arrived and ambled into the park, like the clueless gaijin we are, we got to witness the raising of the giant 100 foot carp, and it was truly impressive. A crane lifted it up into the air, and it only took a few seconds. I was so glad to have seen this moment.

So just what are koinobori about? Children’s Day used to be Boy’s Day, and the carp symbolised strength and courage because of its ability to swim up river against the raging tide. The koinobori represented a family’s hope that their sons would also be strong and healthy, like the carp. Families would hang the streamers outside their house, traditionally with a big black one on top (representing the father), then a red one (mother), and smaller ones (the kids).

Today Boy’s Day has just become Children’s Day, but the koinobori still remains a symbol of the day. At my daughter’s school, for example, they made an art project of koinobori, and there are two big ones hanging up in the gym. At the Peace Park, there were thousands of them that had been made by kids at the local schools.

Okinawa Peace Park has many monuments dedicated to the hundreds of thousands of people – both military and civilian, on both sides of the fight – who died during the Battle of Okinawa and WWII in general. Nestled atop a hill top, the park is huge, and has incredibly beautiful views of the coastline. 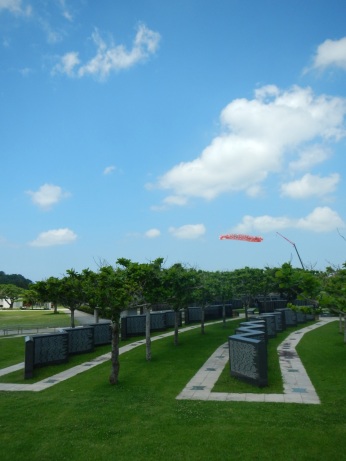 As always, it’s hard to imagine that this lovely island went through such dark days!

2 thoughts on “Koinobori in Okinawa”