About a month ago I was able to make a quick trip to Winnipeg, which is the capital of the province of Manitoba. This month I went a bit more west to visit two cities in the province of Alberta – Edmonton and Calgary – which are about a 3 hour drive from each other.

The Kid really loves science, and has an interest in dinosaurs, so Alberta was a great place to visit because it is Canada’s epicentre of fossil finds. There’s even a dinosaur named Albertosaurus, as well as an Edmontosaurus, for obvious reasons. While walking around in the dinosaur parks, it was hard to imagine that dinosaurs really did roam around the same area where we were standing.

In Edmonton we visited the Jurassic Forest, a prehistoric dinosaur park with dozens of life-sized animatronic dinosaurs hiding in the woods. As you walk on the path, a motion sensor signals the dinosaur, making it move and make noise. It was pretty entertaining, especially for kids, and quite well done. Except for the giant ants which clearly were not life-sized. 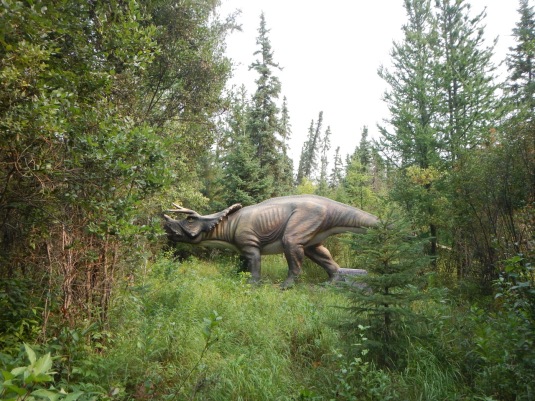 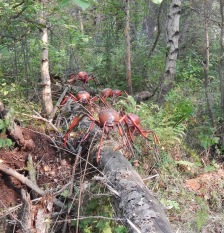 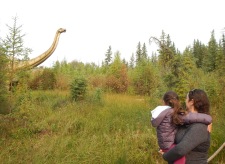 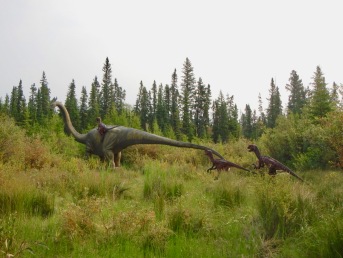 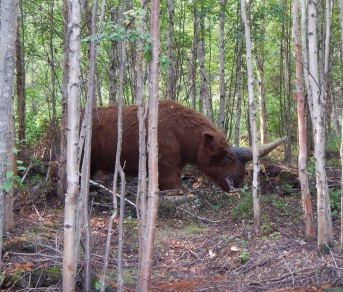 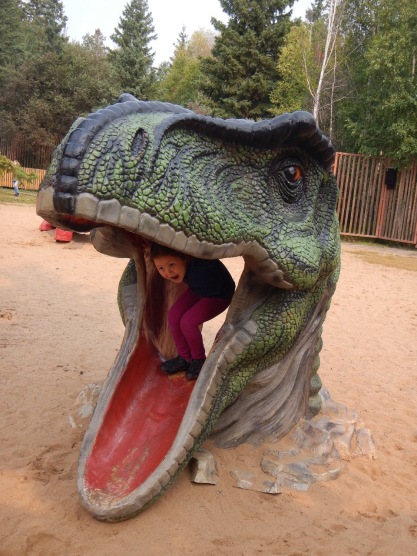 Next we drove south on a long, straight, flat, route on the Trans Canada Highway through endless miles of farmland to meet up with a friend in Calgary. Hour after hour the fields and haystacks just sped by, with lots of cattle roaming around. The prairies are picturesque in their own way, but boy was I happy to see the Rocky Mountains once we reached Calgary, just to have some variety.

The next day we all did a day trip out to the Dinosaur Provincial Park (‘DPP’). It was a long, long drive from Calgary to DPP, almost three hours out of the city, and into some of the weirdest looking landscapes I’ve ever seen. 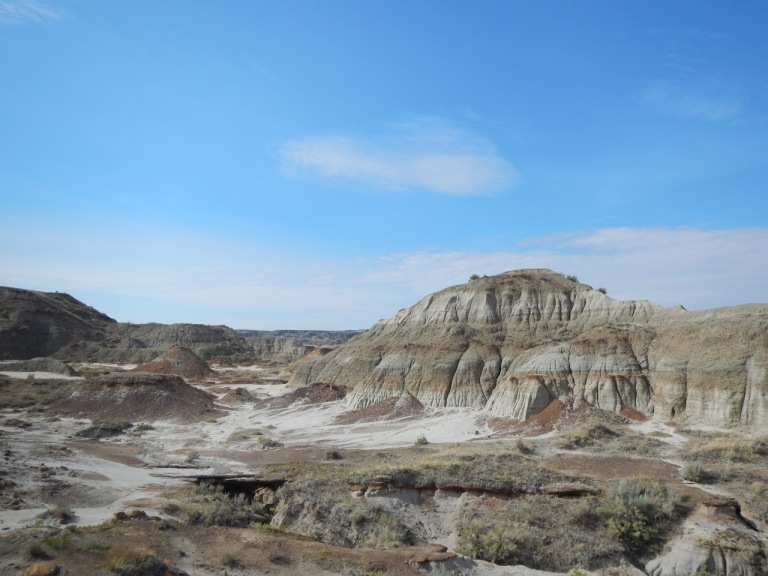 The DPP is located in the heart of Alberta’s badlands, where land was eroded by water and wind to form strange formations known as ‘hoodoos’ and awesome plunging canyons. The erosion also revealed close to 60 species of dinosaurs, dating some 75 millions years, making it one of the richest fossil sites in the world. It is a UNESCO World Heritage Site, and a protected area. 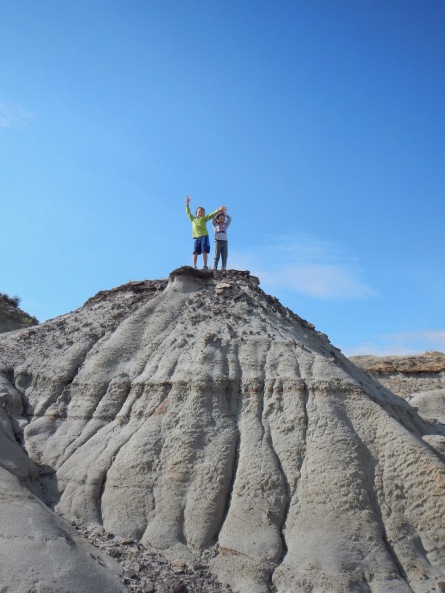 Unfortunately for us, we left Calgary too late, and arrived just after the last tour went out, which meant we would not be able to do any actual digging of actual fossils. It was disappointing but we made the best of it, doing all of the hiking routes and admiring the amazing scenery. 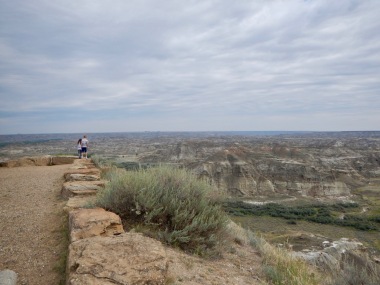 Nonetheless, if you are planning a trip to DPP, then take this valuable piece of advice: MAKE SURE YOU DON’T MISS THE TOUR or else the kids will be super bored and you will regret ever getting a car with them for three hours.

We saw quite a few other families doing the same thing as us – walking around slightly aimlessly, wondering where the fossils were. So whatever you do, don’t miss the tour!!

One of the hiking routes does indeed show you the actual sites where fossils have been found. The fossils are encased in a glass room and if you are lucky you can see the palaeontologists working on the removal of the fossil with their brushes and tools, which is pretty cool. 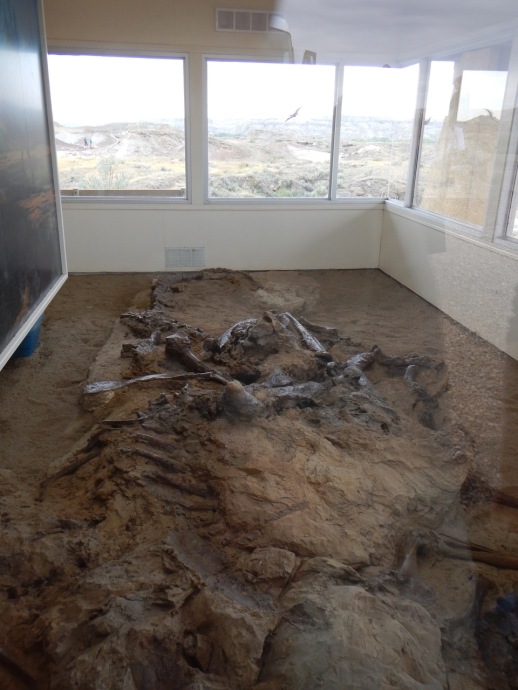 So what’s the verdict? If you’re in Edmonton, and your kids are small (maybe no older than 7), then Jurassic Forest is a surefire hit. The walking routes are easy and the animatronic dinosaurs are entertaining. If your kids are older, then book a fossil finding tour at Dinosaur Provincial Park and do it right.

And hands down, DPP scenery is a winner. 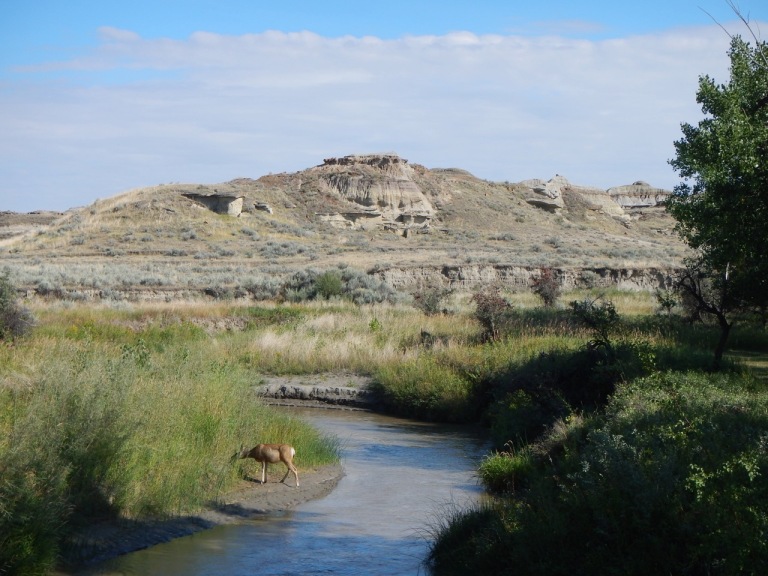